The Steger Center: The Centrifuge For Environmental Leadership.

Our climate crisis has seemingly become an everyday headline passed on through push notifications, retweets, tv, movies, and podcasts. Whether we know it or not, we can see its impact in our own neck of the woods. Wildfires, droughts, floods, once-in-a-lifetime storm surges, and so on. We’re aware of our position against this crisis and our next step is to lead us to the next chapter without falling further back.

Brave New Media has been collaborating with Will Steger and The Steger Center since December 2020. In order to build a better future, there needs to be innovation, ideation, and leadership building so that the generations beyond our own can develop beyond the climate anxiety of our current day.

Will Steger has been one of those strong voices and The Steger Center hopes to strengthen its Ely, Minnesota leadership incubator into a kind of Camp David of Climate Change.

Will Steger is a lifelong outdoorsman, an early pioneer in the fight against climate change, Arctic & Antarctic voyager, Minnesotan, teacher, speaker, and notable award-winner. Like the dogsled carrying him across the Antarctic, these descriptors barely scratch the surface of who he is and how his impact will be felt for generations to come.

Steger has witnessed firsthand how global warming has negatively impacted our polar caps and its domino impact on local natural reaches. Rather than watch the world’s beauty fade away he set upon a new chapter in his storied career.

Steger brought Antarctica into the spotlight and ensured it would be protected. He explains in a National Geographic piece:“We wanted to make Antarctica famous. The Trans-Antarctic Expedition got over 2 billion media impressions, and brought attention to the world about what was happening, and that helped preserve the continent. After the expedition, our team met with world leaders to convince them to preserve Antarctica and in 1991 the Antarctic Treaty designated Antarctica as a natural reserve devoted to science and peace.”

Steger’s ability to fundraise and draw attention to a worthy cause drew the world in, which in effect, changed the way the world saw itself. Preserving an unfamiliar geography was a necessary action so that Antarctica could remain unscathed by humankind’s destructive nature.

Craig Baillie of Brave New Media was able to connect with Steger and develop the vision for The Steger Center’s website redesign. Craig has a cabin in the NorthWoods, (about a 30 minute drive from the Steger Center) so the two were able to get to know each other and find out how to get started on this redesign. “Will and I started hanging out in person. We had to go through 10 years of photos. No one had ever looked at these.”

The project began in the mindset of: we have all these amazing resources, now what do we do with them? “He didn’t have a website” Craig said. “Now, Will was figuring out what he wanted. He has a vision of this center.” The website became the first logical step and so their creative collaboration began.

Brave New Media stepped in and handled the rest. “Our web team is so slick. The team is able to do cost and design and…nobody can do the work we do at the cost we do.” Craig said. “Our team is that good. We’re only eight people!”

Brave New Media knows how to kick a project into gear and make it exciting for everybody. This involved designing, writing, and publishing a brand new website. “Steger is never impressed by a designer” Craig said “but Zac impressed him.”

Working in small dedicated groups is something both Steger and Brave New Media can relate to. No matter if it’s the beginning of an exciting new media project or mushing a dogsled across a frozen continent. 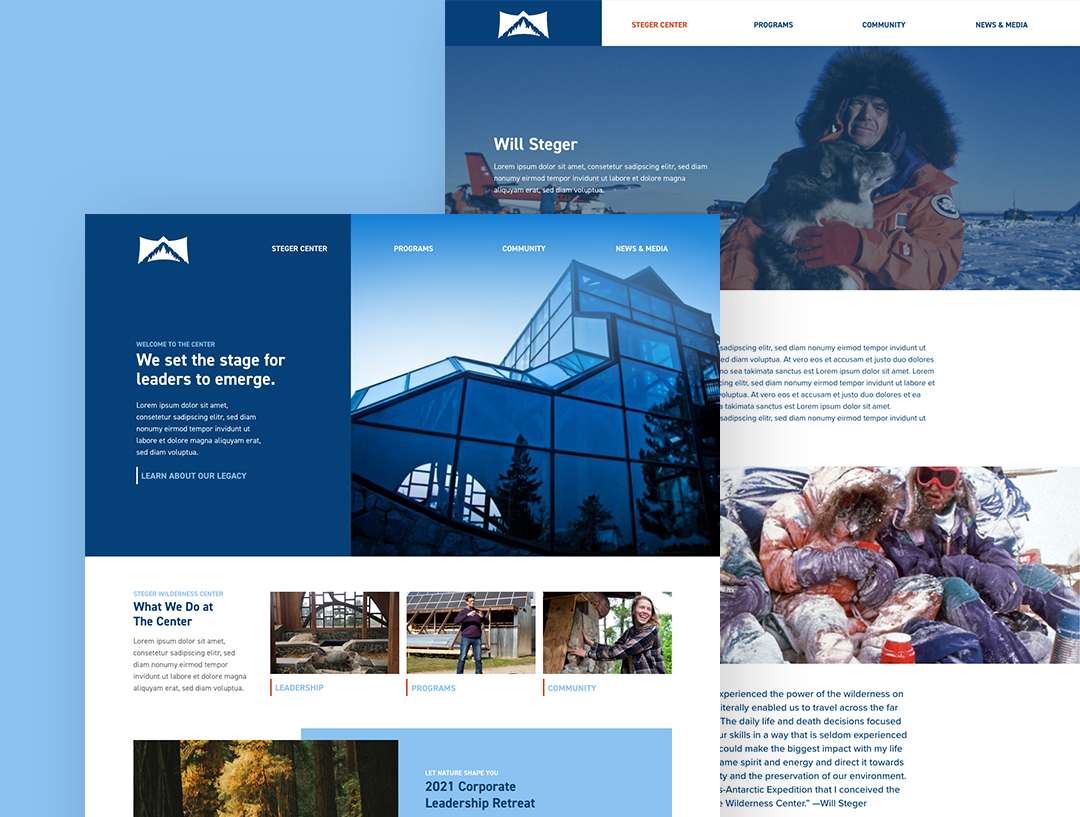 Now, what do we do? The time to sit around and dawdle has long since passed. Donate. Help The Steger Center in its next big push to become the centrifuge for environmental leadership.

It’s time for action and it’s time to sound the alarm town to town, person to person – until it is absolutely understood that each person’s geographic area is vulnerable to this detrimental problem. Lead and educate into the future.